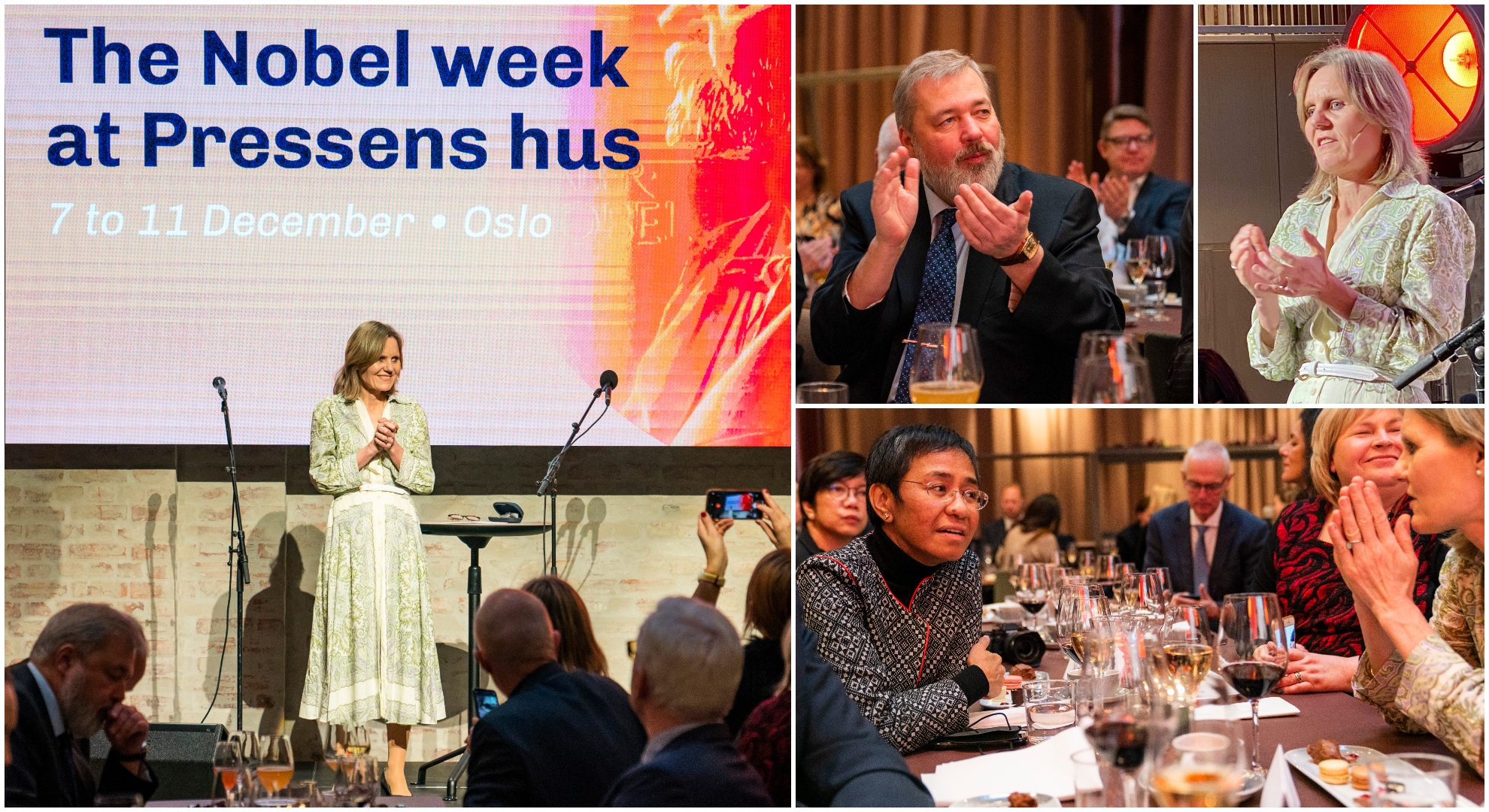 Dear Maria and Dmitrij, dear all of you,

«This gives us hope. The timing is perfect!”

This is what they answered, some of the young news journalists at NRK, including one from the Philippines, when I asked about the importance of this year’s Nobel Peace Price.

“They are risking their life for us

“Reliable journalism has never been as essential”

“We must never take press freedom for granted”

“What the winners stand for is more important than ever”

We live in a world where freedom of the press is under pressure and attack and where authoritarian leaders consolidate their power by changing legislations and curtailing the right to freedom of expression in countries such as Poland, Hungary, Turkey, Russia, the Philippines, Venezuela, Egypt  and Cambodia.

Autocracies are on the rise and are now the global majority.

This is not only a dark time for freedom of expression and critical journalism. It’s is also an age of widespread impunity. A Saudi dissident and Washington Post columnist has been assassinated in a consulate in Istanbul. A Belarus dictator hijacked a Ryan Air flight  to arrest a journalist on board. In Yemen 45 journalists have been killed in the last ten years.

The rise of authoritarian leadership has been particularly disturbing the last years. Many of them deploying governmental apparatus to blackmail, intimidate, torture and imprison journalists. The pandemic has given leaders extended and discretionary power that they may never give up, while the international tech giants are coming out of this crisis even more powerful. The social media platforms have fundamentally changed the dynamic and structure of the public debate. We see it every day - how toxic and divisive content thrives and gets amplified. The platforms have also changed the business and distribution model of news - and some of them have become as influential as national governments. Or even more.

The facts are under attack. In many places we experience a breakdown and a fragmentation of a shared reality. How can we discuss political issues if we are not able to agree on certain basic facts? If nothing is true, how is it possible to speak truth to power?

It's perhaps  easy to despair, but we are going to keep our fight alive. On our part, and in this I speak on behalf og the Norwegian press organizations, we need to intensify our efforts and more actively support organizations and networks that work for freedom of the press and defend the right to freedom of expression and the safety and protection of journalists. We need to find ways to better coordinate and hold political leaders  accountable when they abuse their power and commit crimes inside as well as outside their nations borders.

We expect Norway to use the position in the Security Council to take a leading role and promote the right to freedom of expression and support an independent media, We also need a stronger strategy to hold the social platforms accountable and promote national and international legislation that balances the relationship between the right to freedom of expression and editorial responsibility. We need to support the building of independent media and the capacity of fact checkers globally.

10 years ago we - the media - organized debates with topics such as: The bloggers are coming! Do we need editors? Things would work out without any content surveillance or moderation, some even claimed.

It has never been more important with a free and independent press - with strong and vocal editors.

We will stick to our mission, carry out quality journalism and tell stories that have an impact;  About how migrant children are drowning in the English Channel, and the human right situation for minorities in China, About how Afghan women stand up to the Taliban and how we close our borders to Africa, but dont distribute Covid 19 vaccines fairly. In challenging times it's especially important to raise critical question, do investigative journalism and bring in the the perspectives and tell the human story of the other.

We will never stop believing in the power of journalism and our aspirations to change the world. We will use our power to protect and promote democratic societies and institutions.

As my young colleagues, we are going to meet and confront the future with hope and justice. I think we need to be passionately curios about the young generation in particular. These young people are filled with a sense of commitment to make the future better - their future. And I get the conviction, when I experience their energy and idealism, that they will succeed. Action arise from hope-  and they have such high hope,…..but they have no illusions that the road ahead will be easy.

Hope has always been the engine of progress, generations through generations.

You -  - Maria and Dmitrij  - are  an enormous source of inspiration. More than anyone you give the next generation the gift of hope. A heartfelt thank you from all of us.